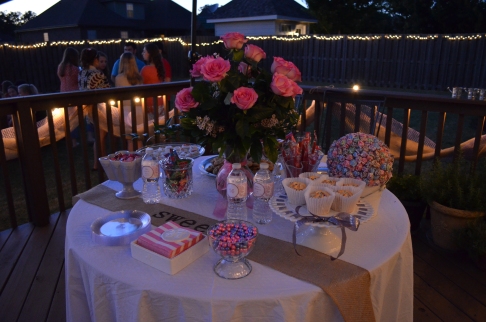 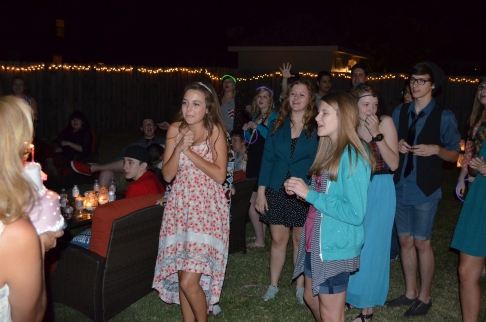 I survived the Sweet 16 Backyard Party. Couldn’t have done it without a few dear friends who helped out at the end when panic mode hit. The most surprising thing? How sweet all of those teenagers were! So many of them thanked my husband and me for the party, praised my crafts and coffee bar, and offered to help clean up that your faith in the American teenager should be restored!

They danced, made super sweet coffee drinks, ate all of the bar cookies, brownies, and blondies that I could provide, and sang Happy Birthday to my Libby TWICE (Lillie was in the bathroom and missed the first version)!

I had been warned that I would have to be on guard for alcohol being smuggled in in “water bottles,” and I feared an over abundance of public displays of affection, but all for nought. They behaved like people grateful to have a party thrown for them.

We had originally thought to do a white tent in the backyard, but after pricing them out (and constantly checking the weather), we decided that we could make it festive enough with lots of lights and burlap. We had string lights on the fence, bulb lights on the deck, and tube lights around a rented dance floor. We moved our patio furniture out to the lawn, and the kids mostly gathered there, squeezing more than I would have expected to fit onto each couch and chair.

The “L” luminaria that I “monogrammed” (drew on with a Sharpie!) for the past month lined the driveway to show the kids where to go. Once they had all arrived, I moved them into a heart shape in the backyard and later saw four kids laying in the middle of them, looking up at the stars. Too cute, but I didn’t get a picture! I am lucky to have any pictures at all and only have them thanks to my husband and seventh grader, who weren’t too shy to mingle with a large lens in kids’ faces. I mostly ran around tending to things, though I did find myself dancing in the kitchen with Tim, Caroline, and my friend Julie when the teens weren’t looking.

So, oops, my first post and I screwed it up. Wanted the pic and text together, but I guess they are separate items. Sigh. Anyway, I’m kind of proud of myself for working on my daughter’s Sweet 16 party for the past month. Usually I make a detailed list of plans and then throw it all together the DAY OF. But, in this case, I knew I wanted to craft some DIY to make a country chic backyard party truly special. No crepe paper! This little girl of mine is all grown up (well, mostly). She knows she likes pink tulle and cowboy boots. Hmmm. . .might have said the same of her at 3! So here we go. . . 50 or so teens in my backyard with a dance floor, music, white lights, candles in jars, and burlap draped everywhere. I can’t wait!