Hmmm. . . not a headline I ever envisioned writing. And yet there I was, cooking in a barn.

Last week my younger daughter was invited to ride a horse she loves at the Pinto World Championship in Tulsa, Oklahoma. We only live about two hours from Tulsa, and after much deliberation, we decided to let her have this adventure.

As we drove down the Oklahoma turnpike with hardly another car in sight, we wondered what the “Worlds” experience would be like. Truthfully, we couldn’t even picture the scene we would encounter. The event is held on the grounds of Tulsa’s Expo Square, their fairgrounds, and there are several huge barns, all named after Chevy trucks.  In addition to the giant pavilions filled with stalls for horses (and humans, but I’m getting to that), there are three performance arenas, which hold competitions from 7:30 am to 5 pm every day for two weeks!

Caroline and I pulled into the first “gate” we saw and somehow got past the security booths to wander from pavilion to pavilion looking for the familiar faces of her trainers or horse. It took a while, but we finally found them . . . happily ensconced in stalls with all the comforts of home. 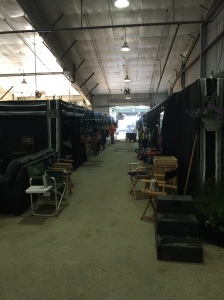 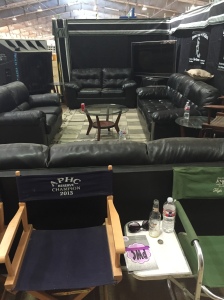 They showed us around “our stall area” — the food stall — full size refrigerator, microwave, drinks, and snacks. The tack stall (it’s a double-wide), the dressing rooms, waiting area, and the horse stalls. I didn’t realize that we would be in this area from sun-up to midnight most days. No wonder they rent furniture and electronics! Caroline immediately scooted off to bathe a horse, and I settled in to one of the leather couches. Our riders, trainers, and horses came and went as they were called to compete in a variety of classes, both Western and English. Costume changes were de rigeur for horses and humans. I watched Analisa polish the silver trim on a $30,000 saddle for most of a day. Tack was used, wiped down, and hung in its proper spot. One night Caroline washed Zipper and his tail extension at 11:30 pm! No one had time to run out for food. As I know nothing about horse care, I realized that I could best help by stocking the fridge with cold drinks and providing food to the busy riders.  Our new best friend and trainer from Louisiana, Stoney, got a crockpot from his horse trailer, and I ran to the market. That’s how I found myself cooking in a barn. We had barbequed chicken, Italian Beef sandwiches, soft chicken tacos, and pulled pork. The tricky part was cleaning up. Sweet Penny usually hosed out the crock at the end of the stalls at night. The kids were happy to have some hot food to go with the usual fare of cheese sticks, potato chips, veggie trays, and other snack foods. One day I cut up a watermelon and was delighted to see that the horses thought the leftover rinds were a tasty treat!

The downside: our stalls were right next to a practice arena which meant that everything was constantly coated in a thick layer of dust. And I’m pretty sure there was “fly spray” in most of what we ingested. But finding a way to be part of the horse team at Pinto Worlds was priceless, and I’d do it again, dust and all. 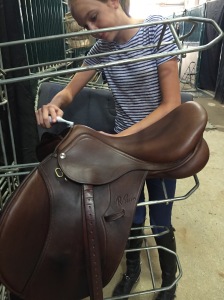 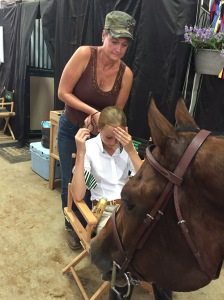 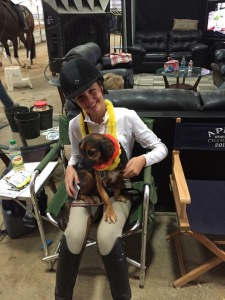